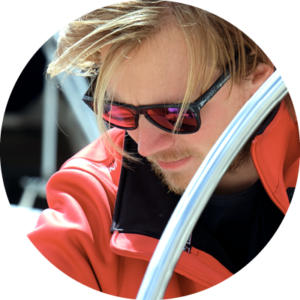 As a solo-racing sailor, his challenge is to cope with more of the cruising lifestyle with a crew twice as big as he used to have. He is still trying to compete in local regattas wherever they sail with Süstik.

Martin is used to eat from the bag that has been just heated up with a Jetboil for weeks, sleep 20 minutes a row and piss into the bailer. It takes some time to get used with real toilet and walking in the cabin without having to crouch. 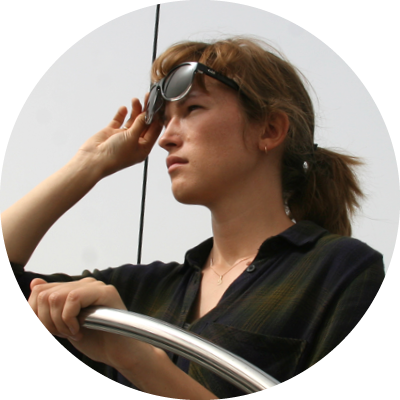 Mariana likes to take it easy, go with the flow and could sometimes spend several hours on sudokus for the grand masters, feeling no guilt in doing so. For her, the first time on a sailboat was few summers back when a friend asked her to join him for a short cruise in local waters. Although the slow speed of the yacht was a bit of a shocker at first, she was hooked to the sea. For now, her longest voyage has been an attempt to sail from Estonia to Portugal, but after gaining some useful experience in heavy weather sailing the crew was sadly forced to leave the boat with a broken mast in France.

Being on board of Süstik is definitely an upgrade from the previous yachts, having the water pump, electrical winch and a massive bedroom to sleep in, but she is still trying to manage with as few things as possible to find out how much one actually needs for living. That is definitely a bit harder when you are a woman – wearing the same t-shirt that you slept in the night before to some fancy dinner parties is totally acceptable.

As she has a background in visual communication, she is becoming the person who walks around the marina and drools on yachts with some fine curves and design.

Although she rather likes to think and observe, the need to keep on exploring and if possible, get some action going, is definitely a must for her also. So changing the sails with some heavy knots of wind – no problem.

Last but not least, she doesn’t get seasick.